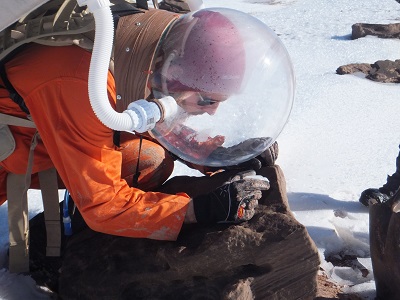 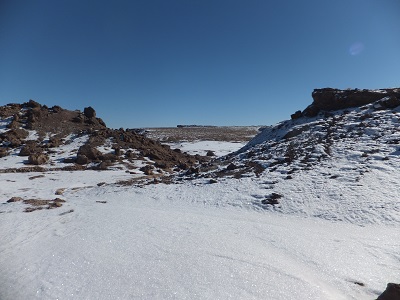 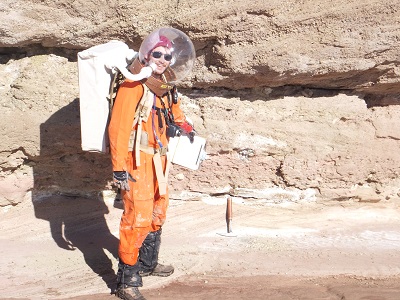 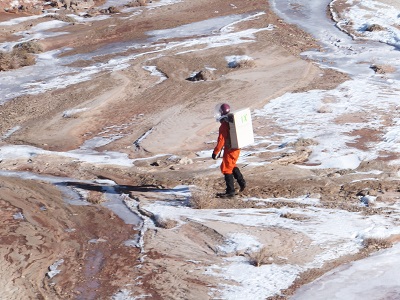 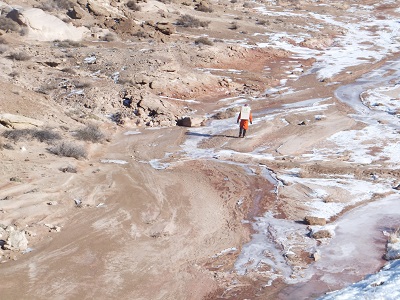 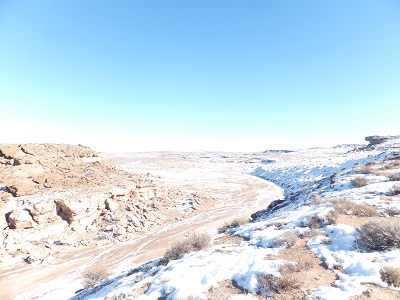 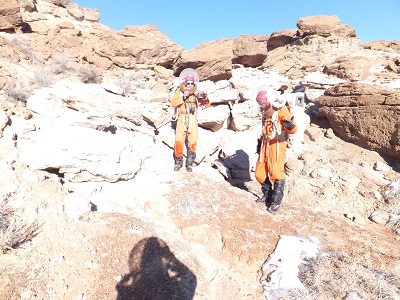 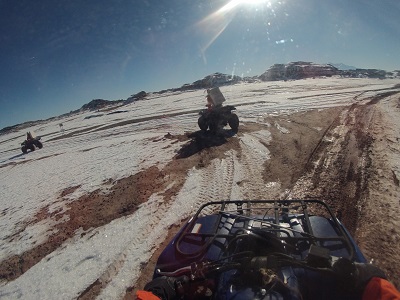 This EVA was our second Geology and first Green Hab mission (GeoEVA_2/GREVA_1). We went to a frozen river valley East of or first Geology/Astrobiology site. We took the ATV's and made two stops before parking along the road and walking into the site. We successfully accomplished all EVA objectives and returned with all equipment, personnel and ATV's intact with no incident.

We began the EVA at 11:00AM MST (Mars Standard Time). We left later in the day to allow the Green Hab crew to implement part of their project that requires time to dry. We headed out, made our first waypoint outside of the Hab and checked the ATV's. We discovered that Commander Orenstein’s ATV, number 4, would not start. Commander Orenstein was the EVA commander and made the call to stay at the Hab, passing EVA command responsibilities to Officer Bouchard, Crew Geologist. Commander Orenstein entered the Hab and the remaining three EVA team members departed.

We kept the ATV's on the road and kept ourselves at a safe slow pace. The ATV's proved to be very effective forms of transportation and we reached the first stop in very good time. The first stop was a stream overflow platform identified from imagery. The team thought that this might be a good place to collect soil for the Green Hab. However after making our second waypoint check-in we realized that we had forgot all excavation equipment at the habitat. Since it was so early in the mission and we had made great time we radioed the Hab to let them know that we were returning to pick up the shovels and to prepare the airlock.

When we returned to the site we discovered it a poor site for soil collection. The ground was completely covered with snow, and even after removing this we were only able to get a few centimeters into the ground. We took a Geologic sample for analysis and returned to the ATV trail.

We followed the ATV trail North until we reached the base of the peak at X, Y. Here we dismounted, made our third way point and collected our equipment to begin the walking section of the traverse. We made our way East into a frozen river channel . We collected five more Geologic samples and retrieved five gallons of sediment for the Green House. We made our fourth and final way point at the farthest East point of our traverse before beginning to the return trek.

This section of the traverse was very successful and have us a lot of great data. The eroded river banks allowed us to see the layers below our feet. At its deepest the channel walls stood 6-7 meters high and averaged about 10-12 meters across. Laden with samples and soil we returned to the ATVs and drove back to the habitat. We reach the Hab at X:XX, where we unloaded and refueled the ATV's.

Despite having three instead of four members the EVA team met all mission objectives and successfully completed out first ATV traverse.

Equipment Report:
SCLSS: The three packs that work worked
Helmet, visibility: Number 10 still has issues with helmet staying mounted. We think the pipes are pushing on it. This leads to a very sore neck too.
Air flow: good, not very noticeable
Coms, usage, drop outs: pretty good. Signal got spotty as we got farther into the river valley and my grey radio turned itself off
Gear, boots, gators, caps, gloves: worked well
Water, usage, accessibility: did not drink much
GPS: worked well. I dropped it when the back popped off, but found it
Digging Equipment: shovels and rock hammer
Other: GoPro on the ATV worked great!
ATV: Nick's did not start so we left him at the hab, but the other three ran great

>missed the third one because it was hard to understand, some obstruction from geography, but otherwise worked well

Half Hour Check in:

time: 2:02
Location: UTM 27, 12S, 518750mE 4250790mN
Comment: EVA team realizes that they have left a camera behind and radio to CapCom to let them know that they are retracing their steps to retrieve the camera.